The total mass of waste electrical and electronic equipment (WEEE) and batteries collected in Austria each year comes to about 107,000 tonnes (data from 2017 – Source is the annual report on collection and treatment of WEEE and waste batteries). By collecting WEEE according to a rigorous system of five collection and processing categories, and by collecting used vehicle and device batteries as well, valuable raw materials can be recovered from waste equipment and batteries. Recycling and reusing old equipment and batteries is essential – not only because our natural resources are growing ever scarcer, but also because recycling is far more efficient in terms of energy use.

The following table and graph provide an overview of the approximate quantity of raw materials that can be recovered from the waste electrical and electronic equipment and used batteries collected in Austria each year.

Breakdown of WEEE and batteries collected (2017)

The two metal portions can be almost entirely reused as secondary raw materials.

Through the use of cutting-edge automatic sorting technologies (e.g. at MGG Polymers, Amstetten, mgg-polymers.com), several distinct categories of plastics (“Plastic materials” portion) can be recovered as secondary raw materials from waste electrical and electronic equipment, and to a small extent from batteries as well (mainly vehicle batteries). Once separated, these plastics can be melted down again and processed into new products. The resulting mass of about 19,000 t of sorted plastics is equivalent to the mass of about 3.8 million garden chairs, for example. As the relative proportion of plastics in electrical and electronic equipment continues to rise, plastic recycling is becoming an increasingly important part of WEEE recycling. 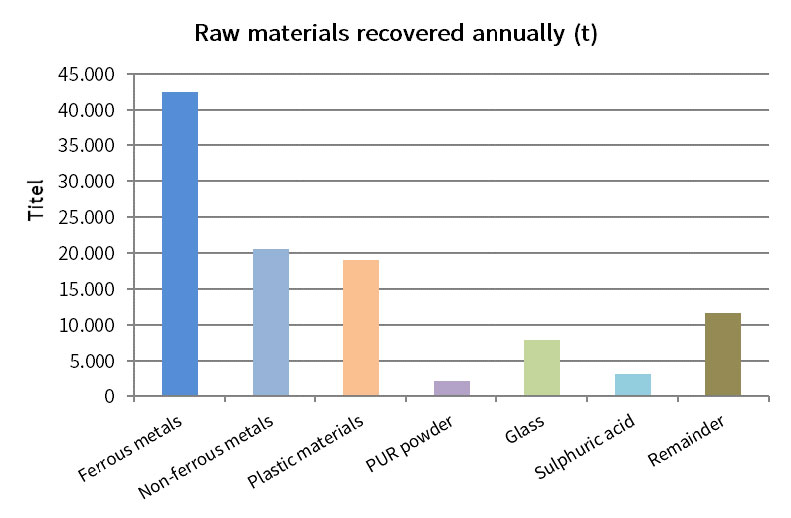 The PUR (polyurethane) powder recovered from refrigerators and freezers can be used e.g. as a chemical and oil binder, or for producing adhesives.

Glass, recovered primarily from display devices and gas-discharge lamps, can be used in the recycling of industrial glass, in the lead industry, or as recycled building materials.

Sulphuric acid is extracted from used vehicle batteries. The sodium sulphate recovered in the recycling process is used mainly as an important raw material in the production of laundry detergent.

The remaining portion consists mainly of the various hazardous components, materials and substances that must be removed from the waste equipment before recycling to avoid any risks to human health or the environment. Collecting waste in strict accordance with the five collection and processing categories ensures not only that raw materials are recovered as effectively as possible, but also that all hazardous substances are safely removed. This portion also includes other miscellaneous components from waste electrical and electronic equipment, such as concrete weights in washing machines, that can in some cases be sent off for material recycling as well.