Education Center Kenyongasse – „Collect casually instead of throwing away uncool“

From February 19 to 23, 2018, the first school project week on the topic of “Correct collection of old electrical appliances and used batteries” took place in the education center Kenyongasse. This initiative was initiated by the Austrian coordination body for waste electrical and electronic equipment (EAK) in cooperation with the MA 48. The education center Kenyongasse acted as a pilot school, with the goal of expanding this environmental educational project to as many other schools throughout Austria as possible. Pupils of all classes and types of schools were able to find out about the correct collection and recycling of old electrical appliances (EAG) and used batteries / rechargeable batteries in school workshops and excursions to waste recycling plants for five days. Waste consultants of the MA 48 accompanied them. The Austrian coordination body for waste electrical and electronic equipment (EAK) has provided the used electronics and batteries school kit with valuable teaching materials, developed by them.

The education center Kenyongasse and the EAK wanted to draw the attention of about 1,900 pupils to the importance of the correct collection of old and used electrical appliances an batteries with this environmental educational pilot school project. More than 30 classes at the EC Kenyongasse spent four days working intensively on waste prevention and waste separation, focusing on old and used electrical appliances, batteries and rechargeable batteries. The idea for this school project is based on the dedicated and very valuable work of the waste consultants who have been running workshops in schools all over Austria for many years. Since 2014, they have also used the used electronics and batteries school kit developed by the EAK in cooperation with Austria’s waste consultants as an environmental didactic tool.

As part of the school project week, a collection day for small electrical appliances, display devices and used batteries was organized especially for the school by the EAK and the MA48. Thereby, e.g. mobile phones, irons, blenders, coffee machines, electric pepper mills, electric toothbrushes, shavers, sphygmomanometers, radios, CD players, video recorders with remote control, drills, laptops, printers, other small appliances and display devices up to 50 cm were collected. For this, a competition was also announced, in which the class, which had collected the most broken small electrical household appliances / display devices, was able to win EUR 500,- provided by the EAK for their class fund.

At the end of the project week, pupils from the 3rd and 7th grades, together with the EAK and the MA 48, presented the most important results and insights they received during the week. In addition, the winning class of the internal school competition was honored by the EAK during the press conference.

Back to the overview of school projects

Federal ministry of sustainability and tourism

Do you need support?

You can contact the Austrian coordination body for waste electrical and electronic equipment via eMail to schulprojekte@eak-austria.at resp. at the phone number +43 1 522 37 62 – 12 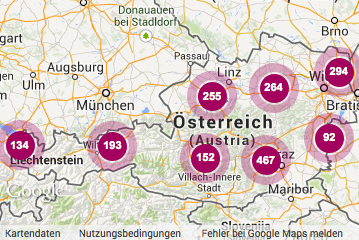