Through their dedicated efforts, Austria’s 400 or so waste management consultants make an essential contribution to sharing knowledge and raising awareness about protecting our environment and conserving key resources. To honour their important work, the “Elektro-Nick” environmental award for waste management consultants was created in 2015, the year of the EAK’s tenth anniversary. Since then, the prize has been awarded every two years. The Elektro-Nick highlights the exceptional efforts of Austrian waste management consultants who stand out for their unique commitment and creativity in implementing the selected theme for the given year. Based on a transparent point-based system, a jury of independent experts evaluates their work at schools, child care centres, or external workshops and events. The creatively shaped award statuette is donated by the Montanuniversität Leoben and created by students out of scrap electrical components.

The “Elektro-Nick 2019” was awarded by the Austrian Coordination Body For Waste Electrical and Electronic Equipment (EAK) on April, 09th as part of the annual waste management consultancy workshop held at the Lindner Hotel am Belvedere in Vienna.

Bettina Leiner from Spittal / Drau (Carinthia) won the Elektro-Nick 2019 – the charming trophy created by students of the Montanuniversität Leoben – as well as a cheque for EUR 700, – due to an extremely professional, multimedia presentation of the main focus. She created radio spots, a short video and posters, which were also showed in cinemas before the feature-film started.

1st price – the Elektro-Nick 2019 and a cheque for 700 euros went to Mrs. Bettina Leiner (waste consultant in Spittal/Drau) due to the multimedial presentation of the main focus.

Über 2nd price (500 euros) were the employees of the AWV-Leoben (Styria), due to their excellent presentation of the topic “Lithiumbatteries” during their “Partner Day 2018”.

3rd price (300 euros) was awarded to Mrs. DI Ingrid Pirgmayr (MA48 Vienna) due to her extensive and creative engagement, especially for a student-video project and a self-composed battery song.

The “Elektro-Nick 2017” was awarded on 25 April as part of the annual waste management consultancy workshop held at the Alpenhotel Speckbacher Hof in Gnadenwald, Tyrol.

The selected theme for the 2017 Elektro-Nick competition was “Stopping illegal exports of waste electrical and electronic equipment”.

Waste management consultant Johannes Wagner from Tyrol won the 2017 Elektro-Nick. The winning project was a short film that Wagner made with help from the kids in Class 2b at the Neue Mittelschule Kufstein, and support from the Kufsteiner Stadtwerke public utility company.

1st prize – the Elektro-Nick and a cheque for 700 euros – went to waste management consultant Johannes Wagner of Tyrol, who made a short film with help from the kids in Class 2b at the Neue Mittelschule Kufstein and support from the Kufsteiner Stadtwerke public utility company:

2nd prize (500 euros) was awarded to Bettina Leiner of Carinthia (Spittal/Drau Waste Management Association), who drew strong attention to the topic with a strikingly designed “moving board” ad poster and a waste collection schedule.

The 3rd-prize winner (300 euros) was Vienna waste-management consultant and certified engineer Ingrid Pirgmayer (MA 48). She impressed the jury with interactive quizzes for kids and adults, tours of waste disposal sites for schoolchildren and retirees, and a game of skill entitled “Stromschlag” (Electric Shock), in which players have to “rescue” used devices from being smuggled out of the country, while also avoiding electric shocks.

The EAK’s environmental award, known as the “Elektro-Nick”, was established in 2015. As part of the anniversary symposium that was presented in honour of the EAK’s ten years of existence, the Elektro-Nick was also awarded for the first time. The winners were three waste management consultants who had made exceptional contributions to long-term environmental education and increased awareness among children and young adults through their dedicated efforts to promote the Used Electronics and Batteries School Kit.

1st prize – the Elektro-Nick and a cheque for 700 euros, went to waste management consultant Katharina Moritz from Leoben (Styria).

2nd prize (500 euros) was awarded to a waste management consulting team from MA 48.

The state of Styria took home 3rd prize as well. A pair of waste management consultants from Hartberg were happy to receive a certificate and 300 euros in prize money.

CONGRATULATIONS TO THE WINNERS OF THE ELEKTRO-NICK 2019! 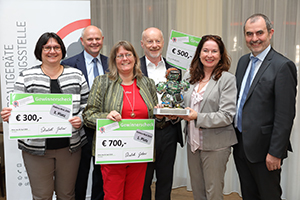